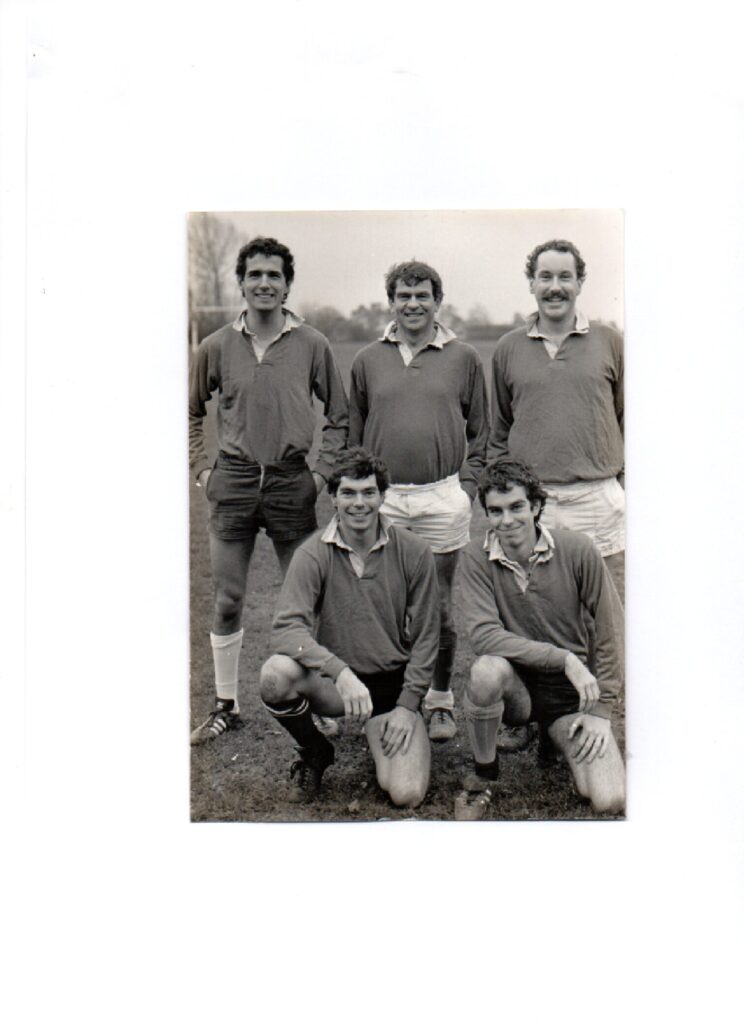 “It was the autumn of 1952 that I had my first game of rugby at centre for Tunbridge Wells (it was Old Skinners then) I remember two things of that game: 1) The fly half Guy Batchelor, who became a good friend later, did not past the ball to me once and 2)I had my first beer afterwards in the Imperial in Southborough.

I really started regularly in 1957 – after National Service, I was in  the “A XV” under Pete Jefferies – we were still playing at Southborough – Southfields, so it meant changing at the school walking a mile to the ground and back – wash in the school basins then head off for a beer – Our HQ then was The Cross Keys. Over the next few years we changed pubs numerous times The Camden, The Culverden, (both now gone) The George and finally the Sussex Oaks run by Dennis Lane – father of Joe, who played for our 1st XV.  Then, thank goodness, we built the first clubhouse at St Marks – in the first year we grossed £1,000 but the profit was nil – the then Chairman and bar steward left immediately…….

By this time, I was captain of the “Glorious A” and continued to be so for the next umpteen years. Occasionally, I played in the 1st XV where on one memorable occasion I broke my ankle up at Osterley – this started a love/hate relationship with the Kent and Sussex Hospital – they despised all people in dirty striped shirts who arrived there on a Saturday evening! Nose broken 3 times, dislocated arm and more stitches in my head and body than I care to remember.

In 1965 we moved to St Austell in Cornwall, where I played in the back row for the 1st team and we went a whole season without a loss. This brought me my only representative honours in the game I love. I was selected several times for ‘Cornish  Clubs’ XV, and once had the privilege to play alongside Richard Sharp (ex England fly-half) who had just moved back to St Austell.

There was one other game when I played with  two current internationals for Tunbridge Wells 2nd XV.  Colin Smart came up from Newport for the weekend and bought a friend Jeff Squire (who confided in me that he had never played “course rugby”). As the first XV did not want to “upset their squad” I commandeered them for the afternoon. We travelled down to Plumpton and the first site of the ground was the metal posts leaning askew at a 15 degree angle! We changed in a small wooden shed with nails to hang your clothes on and cold water afterwards to wash. Jeff loved it and scored 4 tries  and admitted “I’ve never run so far without being tackled”.

Undoubtedly, the highlight of my rugby life, was one day on a cold wet pitch at Hadlow College. I played with my four sons (all who  played for TWRFC 1st XV) against an Old Juddians side and we won 6 – 3.

I continued playing until 1987 – including captaining the only time TWRFC fielded a 6th team. The only instructions I gave the boys that day was, we will play it the ‘old way’ i.e a stop at the Weald pub before the game for a quick pint and no going home early to the wife after it was over – we won  and all enjoyed it. The last game I played was away to Old Gravesendians when I snapped the other upper arm tendon!

That started me on refereeing – firstly at TW and then for the Kent Society. Great fun and thanks to Clive Evans and my instant availability, I got one or two good games well above my status. My Presidential responsibilities for 11 years then prevented any further involvement on the pitch. Now, every Saturday I’m at the pitch-side and thanks to Wicko and friends I get ferried to away games. Funnily enough when we come back from away games we stop off at the Imperial in Southborough – nothing changes. COYB.”