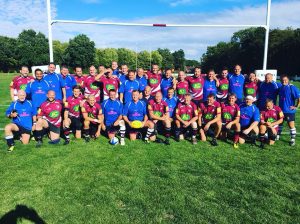 A reading from the (less than) sacred scriptures

And it came to pass, in the second year of the reign of King Creesius the lusty, that the Lord God commanded the ancient men of Tunbridge to battle the heathen men of Cranbrook. For Cranbrook were an brutish and ungodly rabble unpleasing to the Lord.

And so, verily, the men of Tunbridge wandered to that far and distant land; robed only in cloth of finest blue, provided by an strange man of hideous appearance whose loins were girded heavily as to maketh his pants seemeth fat.

And, hark, a whistle blew and the Spirit of the Lord descended- so as to maketh them all keen unto a man. And they did take the fight to the heathen heartily, the Baldock running hard, his knees lifted high, his chest stuck out, until the breath runneth from his lungs and his rounded belly dragged upon the earth. And he was joined in the warrior pack by an assortment of blessed disciples; Milo, Tiggy, Craney, Gray, Fatpants, Kenners, Mac, Croker and an dodgy looking chinaman named Taz.

And these mighty men did battle hard, singing hymns of love unto the prophetess Emily, and did provide much ball to the glory of God. And they were inspired by the oldest amongst them, an ancient man whose years span eight and fifty, and Maynard is his name. And he is an miracle. And he also played the day before, despite his crumbling form, for the seconds. And he is an hero of the vets.

And lo! A giant then appereath from amongst them, Andrew by name, of the tribe of the Northern of Irish, who smashed the heathen aside to put the first points on the scoreboard. And then did a fishy prophet of the Lord, one Bob-eye Jee, kick the conversion. And the Lord was mighty pleased.

And the whistle bleweth again and the men of Tunbridge returned to battle. And lo! A pretty angel did appear in the backs, sent by God, and his face was brilliant white and his buttocks rounded and firm. And he did score an brilliant try by using a dummy, scissors and pop. And Beamooooo was his name. And Bob-eye Jee did converteth again and the men rejoiced heartily…for it was now 14-0.

And Beamoooo was joined amongst the angel host by other fair beings of smooth face and effeminate nature. And their names were Hacker, Daley, Webster, Wratton, Derbyshire, and Hughes. And an angel that was fallen stood amongst them, an demonic and evil being, whose leg was deformed. And Riggers was his name. And he was an horrid abomination before the Lord. And the men of God turned their faces from him. And none would speak of him.

At his command the enemy rallied and the heathen respondeth with an glorious try- straight from the kick off- the ball sailing into the hands of a winger to frustrate the will of the Lord. But the men of Tunbridge were not afraid for a midget did then rise up from amongst them. And the midget did score an third try. And the people of God asketh him to stand before them. And Milo was his name. And the Bob-eye Jee did kick once more and the Lord was mighty pleased.

But lo! What awful play is this? An calamitous and embarrassing knock on from an hairy and brutish man, Mac, whose anger spilleth over and who did provide for the heathen many penalties with his loutish play and angry visage. But the problems were overcometh when a soldier of the Lord, fleet of foot, did outsmart the enemy on the flanks. And Wratton was his name. But the try was not given for an monstrously foolish and ignorant man, named Croker, did raise his flag and call for a line out. But the soldier of the Lord was not dismayed and scoreth again and this time it stood. And the Bob-eye Jee kicketh but this time the ball striketh the post and the Lord was displeased. And Riggers did laugh for he is evil.

Now there stood on the field an crippled man whose arm the Lord had healed; an copper man, strong of back but wonky of eye. And he did stand behind the pack to play scrum half for his healing was so recent. And Tiggy was his name. And he did try a fancy boxed kick and verily did make himself look like an arse. And riggers did laugh at his misfortune, for he is a vile and evil being, and wants to return at 9.

And there was on that field of play also an greedy man who did run mazily through the heathen hoard to score under the post in the second half. And Charlie Hacker was his name. And he did convert his own try for the fishy prophet, Bob-eye Jee, was taking a breather. And the Tiggy also scoreth an try and the Hacker kicketh that also.

And behold! The Bob-eye Jee did return to battle and was tackled naughtily by heathen swine. And the fury of the Lord possessed him and he did breathe mightily through is nose, red of face and awful stroppy. And he did smash his opposite man and whinge a plenty. And the heathen laughed at him and scored another try in return.

And the battle drew to a close and the Lord proclaimed his delight in them all. And the men of Tunbridge did stay for a beer and also won the drink off. And then did they travel to the home of the fishy prophet, Bob-eye Je, for a festival of sausage cooked on a brazier of silver. And the men enjoyed their ‘bit of sausage’ and danced into the night. And two disciples of the Lord, Tiggy and Laurence, did attempt to entertain them all with gripping tales of a constabulary nature which sent them all to sleep.

And the Lord looked down on the mighty vets that day and saw that they were good. And he proclaimed this a year of jubilee and commanded them to go forth into the world of Kent and claim a cup of finest gold…the season has begun.