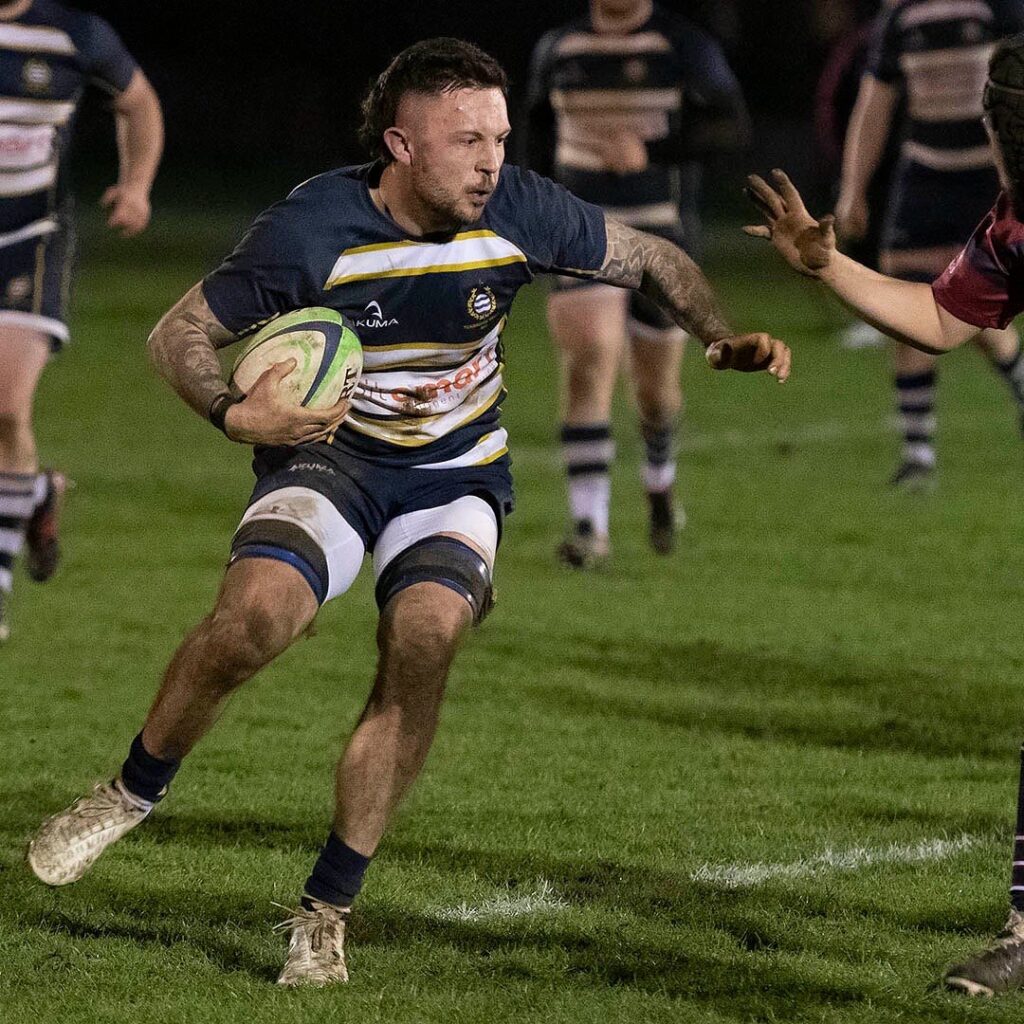 This was a rearranged fixture from a pre-Christmas postponement, played Thursday 3rd February under floodlights. On a cold evening with a chill wind Tunbridge Wells rallied but were arguably short changed under the shining Sidcup lights. Wells made a great account of themselves and should be extremely proud of a much improved performance as they confirmed they are in the right league.
Wells were once again slow out of the blocks but bravely defended their line from the first touch ‘knock-on’ at kick off.
They repelled a strong Sidcup for 14 minutes until the home side notched up a litany of points in the shape of a penalty, try with conversion and another penalty, making 13 unanswered points in total. Nearly matching the number of penalties conceded by Wells over that allotted time!
From the resulting kick off, Wells sent the ball high, Sidcup knocked on, but Jack Lord was deemed to have pushed a lingering forward out of the way, in order to close in on the fumbling Sidcup player. The referee felt a yellow card was the appropriate sanction, and the resulting pressure soon turned into 3 more points. Score now 16-0.
Still with Jack Lord in the bin, he was soon to be joined by Richard Webster who had kicked through a ruck. This resulted in another penalty, which was swiftly dispatched. Momentarily Wells were down to 13 men. 19-0.
Jack Lord, the 1st Wells yellow came back on, and shortly after, with only 14 on the pitch, they get a chance to take the 3, after some Sidcup ill-discipline. Fin White, Wells’ wispy 10, stepped up to slot. Back from a broken hand injured some weeks ago at Westcombe Park. He didn’t miss. 19-3
Now Wells with a ‘full fat’ 15 players back on, the super talented Wells 8, Nick Doherty crashed over, making a more respectable score line of 19-8.
Wells then proceeded to boss the game and repelled a resurgent Sidcup. They managed to get into Well’s half only to be suckered with a well read interception, just before the end of the half, by the motoring Max Hobbs. Fin White ended the half by capping the cake with the 3 point cherry.
An extremely relieved and excited visiting vocal group of Wells supporters clapped their resurgent team off with the half time score tightly balanced at 19-15.
Shortly after the restart Sidcup notched up their only points of the second half with another penalty. Now 22-15.

This was a low scoring second half with a more disciplined performance from the Wells side. Pressure gradually and carefully built as the half went on and Wells had the last 10 minutes all to themselves, countering with an incredible 45 metre thumping 3 from the golden boot of Fin White. Score line now 22-18 and the Wells visitors were going crazy.

Wells camped in Sidcup’s 22 – Tom West, who was superb, had now been replaced by the baby faced Max Douch at 9. Tom Adams who had lead from the front all game was having the game of his life.
This was close and it was scrum time in front of the shattered Sidcup defence.
However, sadly, reminiscent of the recent ending of the match at Murrayfield this weekend. Scrum pressure in front of the sticks only resulted in numerous free-kicks. And sadly both for England and Wells, pressure didn’t make points. And both games ebbed away.
Wells should be rightly proud of how they worked as a team and if only they can get an early foot hold, then they will clearly climb.
This Saturday Wells welcome league leaders Hertford RFC to St. Mark’s – 2.30pm k.o.
Tim McCabe