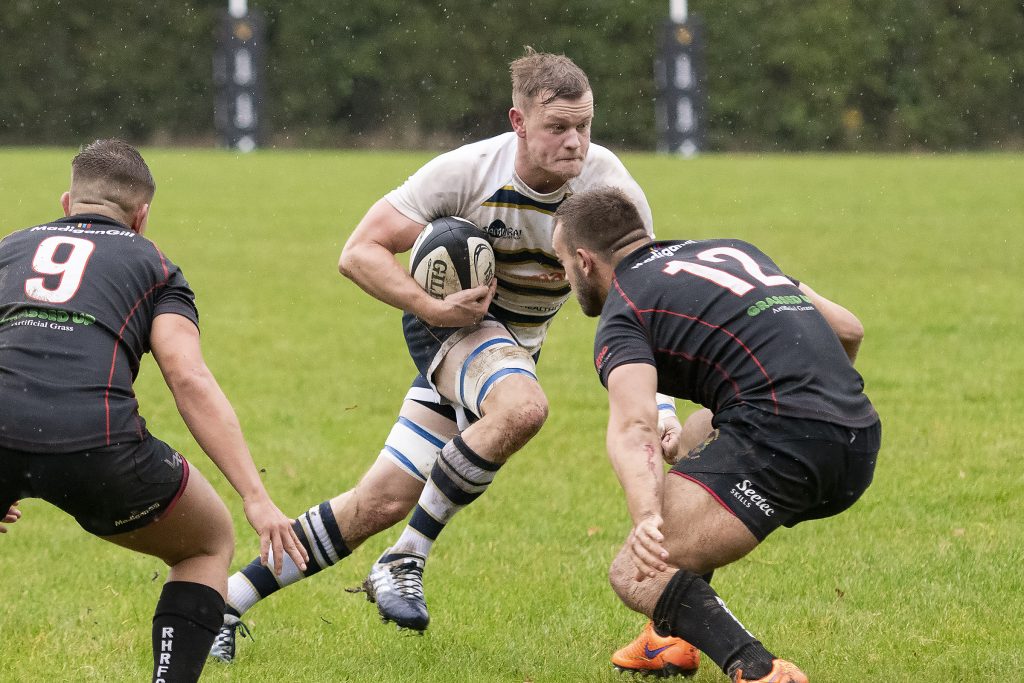 Tunbridge Wells travelled to Essex to face Rochford Hundred for the first time. Having won their first three league games they were hoping to get their league campaign back on track after defeats to Hertford and Guernsey but the portents were ominous given that the home side had not lost since April 2017. Indeed, they had enjoyed a remarkable 53 successive bonus point wins since then encompassing two promotions and five straight wins this season.

The Wells team featured just one change from the side that had battled so manfully in Guernsey with Charley Smith coming into the second row after some excellent performances in the Second XV. This saw Ben Whale move to flanker and Chris Brown on the bench (but, as it was, for not too long). They also came face-to-face with a familiar face with the club’s popular former lock Jake Mills making his debut for Rochford.

The game was played in continual drizzle throughout which very much dictated the style of the game, and was to suit the powerful, forward-orientated, approach adopted by the home side. Having first use of the significant slope it took Rochford just 4 minutes to open the scoring as a series of phases led to prop (and skipper) Aston Bevans-Royston scoring a try that was converted by outside half Cameron Greenhall. 7-0.

What was pleasing was how the team from St Marks responded to this disappointing opening. From the re-start they forced the home side into touch 5 metres out. However, whilst the ball was secured at the attacking line-out the forwards could not force their way over and were penalised for holding on. The respite was temporary, though, as a good catch and mark by Ollie Allman then saw his long kick dropped by a defender leading to a scrum 30 metres out. When Rochford were penalised, Frank Reynolds put Wells on the board with a penalty goal to make it 7-3 after 9 minutes.

Brown entered the fray on 15 minutes to replace the influential Mike Hathaway after he succumbed to an injury. The flanker was to do a good job in the back row, and although Whale now moved forward into the boiler room the Kiwi was as prominent as ever in producing another robust performance.

Rochford returned to their persistent “pick and go” game down the hill, recycling well and despite Wells’ best efforts home flanker Harry Hudson crossed for their second try on 18 minutes, again converted by Greenhall. 14-3.

George Montgomery now made the first of two appearances as an interim scrum half whist Eddie Croft received treatment for a blood injury. The Wells scrummage has been the subject of much scrutiny in the past few weeks but was noticeably more solid in the first half and it needed to be. The home side have an effective and efficient pack of forwards and their back row ranks as the best the Kent team have encountered thus far this season.

However, Wells were very much in the game. Max Hobbs made a break that was halted by good defence. Aided by a string of penalties awarded against the home side, the visitors spent a sustained period of possession around the Rochford 22 metre line. Playing up the hill Wells were deploying a sensible kicking game to pin the hosts back and build pressure. The key when coming up against the league’s strongest teams (and make no mistake this Rochford side will certainly be one of these) is to turn such pressure into points. Although Reynolds missed one shot at goal that will have disappointed him, he slotted a second kick on 36 minutes and half-time was reached with the score 14-6.

The first period had witnessed a good performance from Wells and with the potential tactical advantage of the slope for the second 40 minutes there were understandable grounds for optimism, despite the quality of the opposition. However, it was Rochford who started the half on the front foot and the visitors were forced to soak up lots of pressure, and soak it up they did. Allman was having a particularly sound game with his defensive positioning and kicking and eventually Wells were able to clear their lines and get back on the front foot. Luke Hawkins replaced Stuart Nicholls at hooker. On 59 minutes another penalty was earned which Reynolds slotted to really put the proverbial cat amongst the pigeons. 14-9.

However, this simply spurred the home side back into action and after a flowing attack a fine cross-field kick was gathered by wing Danny Cleare to score a try out wide on the left. The conversion was missed but it was now 19-9 on 63 minutes.

Wells bounced back though. Nick Doherty and Whale combined to almost release Richard Webster, but this was not the only line break in the game that was thwarted by good home tackling where in other games a try might well have been scored. As time ticked down Rochford seemingly took a leaf out the Wells play-book. They kept the visitors pinned back in their 22 metre area as they went in search for a fourth ‘bonus-point’ try to maintain their remarkable winning run, and they looked to have secured this only for the ball to be spilt over the line. However, the men in black then pushed Wells off the ball, and when they fed the ensuing re-set scrum number 8 Mac Duaibe touched down with five minutes to go.

This was a very resolute Tunbridge Wells performance and the final score was perhaps a shade flattering to Rochford. However, full credit is due to the quality of the tight game of Rochford and for being more clinical in taking their chances. They gradually exerted the upper hand at the set piece and their good, clean line-out allowed them to put pressure on Wells. Even when Wells had the territorial advantage the Essex team did not panic and went through their phases impressively. However, the visitors should be far from disillusioned. This was another highly-competitive effort against a top side and now the focus must be on regaining the winning thread back at St Marks this Saturday (19th October) when we host London Irish Wild Geese with a 3pm kick off.

Rochford and Wimbledon remain joint top on a maximum 30 points after the latter’s away win at Sidcup (23-34). Guernsey are third on 24 points after a 3-20 win at our next opponents London Irish Wild Geese. These three are already stretching clear (where I predict that they will stay!) ahead of Dorking (who impressed in a 14-38 win at Tring) and Hertford (who surprisingly lost 8-7 at CS Stags 1863) on 17 points. Sidcup are 6th on 16 points and we slip to seventh on 14 points where we are joined by our friends up the A21 Sevenoaks after they had a hard-fought 14-7 home win over Brighton. Tring and CS Stags come next on 11 points, then it is Wild Geese on 10 ahead of Bedford Athletic who move ahead of Guildford after beating them 29-21. Brighton continue to prop up the table after 6 games.

At St Marks,Tunbridge Wells 2s hosted the Old Elthamians Development Squad. On a dour wet day the home side started much the quicker of the two sides putting the visitor’s defence under immediate pressure. but they held firm and the big OEs side were able to clear their lines.

There were plenty of mistakes in a highly competitive (if scrappy) first 15 minutes which saw Tiggy Bartley replace El Cureton, who had suffered a frustrating hamstring injury. Despite Wells’ early pressure though it was the visitors who were first on the scoreboard. After an earlier penalty miss they went over for a try on 20 minutes to take a 0-5 lead.

Strong Wells defence from the new centre pairing of Lucas Scully and Harvey Colangelo was needed to keep OEs out and some fine clearance kicking from Tom Burgess saw it remain 0-5 at half time.

There is a great spirit forming in this squad and the young Wells side took the game to OEs in the second half, dominating possession. They went close on 50 minutes after some fine forward play from James Webb, Connor Davis and James Pancaldi (on his debut). A try was ruled out for being held up over the line but Wells were not to be denied and they soon got their reward when Davis powered over for an unconverted try with 25 minutes to play.

The game was very much up for grabs with OEs throwing everything at Wells. However, on 70 minutes it was the home team that countered and took the lead when Webb powered over, Burgess just missing the conversion. The visitors tried everything as the hits got bigger and the penalties more frequent but Wells hung on for a fine victory.
This young team are coming together well and the future looks bright.