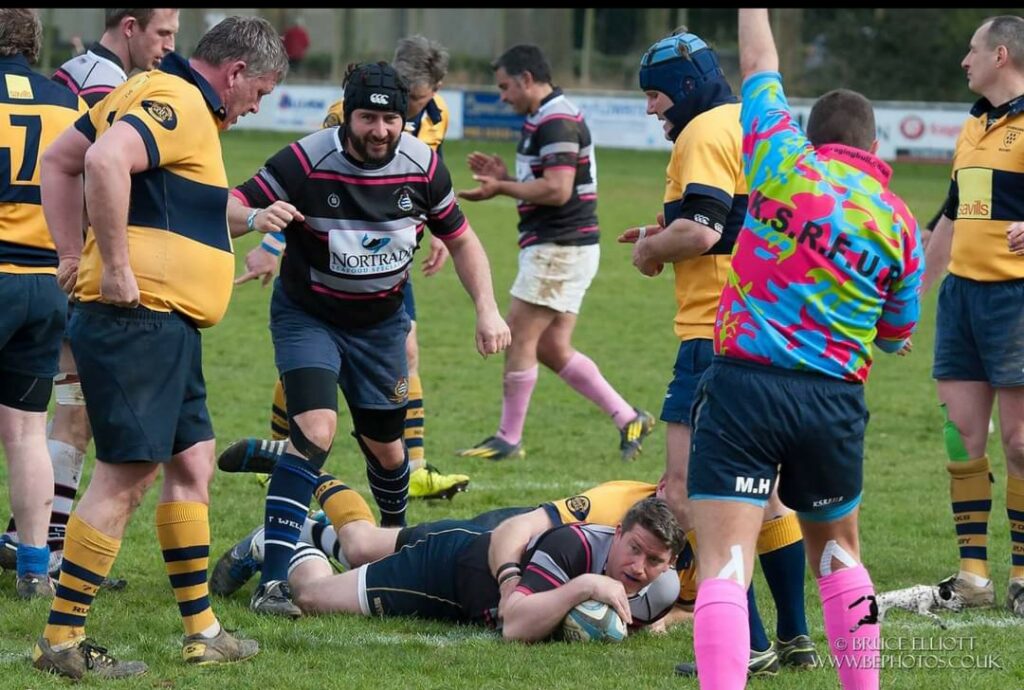 “I joined the club in 1988 in the mini section with my Dad as one of the age group coaches. Interestingly, I was in the same team as Rachel Daly, wife of Steve, and sister of Matt (another new VP).

I stayed with the minis for a while up to the age of 13 when I went to secondary school at Sutton Valence. I maintained my rugby at school playing in the back-row. At the age of 16 following a training camp that was led by the great Chalkie White, he encouraged me to move out to play at 10. Under his advice I moved and thrived. At school I went on to represent Kent, captained the Scottish Exiles, represented Scotland u18 and was in the u19 World Cup squad. Unfortunately due to a head injury I had to pull out of that squad and missed out on a great opportunity.

I continued to play my rugby at DeMonfort University in Leicester. I had a trial at Leicester Tigers and represented the Academy up to u21 level. I played alongside future England internationals such as Harry Ellis, Louis Deacon and Danny Hipkiss. On graduating I moved home to TW and rejoined the club. I was surrounded by some fantastic players and club legends such as Mav, Bobby G, Harry John Crees, Milo, Josh Taylor, the Sharples brothers and the Claughton ‘sisters’…and as a young, slender 23 year old in my second season of senior rugby at TWRFC I won young player of the year, was the league’s top points scorer and represented Kent 1st XV at fly-half and Centre.

My job took me to London and for the next 5 seasons I played at Richmond. It was there where I scored 40 points in 1 game during, what was then called, The Pilkington Cup. This record still stands today as the most points scored in a single game in the cup competition.

I moved back to TW in 2007 and rejoined the club under Mav as captain. I was enjoying being back. In the mid point of 2008 I suffered a very bad knee injury that kept me out for a few months and on my return a few games back I became very ill due to having Crohns Disease and was rushed into hospital. As a result, I was in hospital for a month and had a long road to recovery. This meant for the next 5 years I didn’t play any rugby and with my son getting to the age where he could join, I decided to give it another go and signed us both up.

I began to play again and coach my son’s age group. I continued to play for the senior teams but my knee was never fully fixed and continued to hinder me. I noticed my pace was dramatically impacted because of this…that or the weight gain! I found a whole new appreciation for the club as a member of the minis and playing teams. I had missed the rich value and community that a club like TWRFC provides. It is no surprise that many of my closest friends are also members of TWRFC!!

Now I am giving back and have been so proud to watch my son and his team mates progress and develop a love for this sport and club. I have been with the Academy since it was first set up alongside the likes of Tiggy, Gwinny, FP and Milo. More recently, I have been helping Milo and Simon Parsons with the ladies teams and seeing this side of the club grow. As my daughter has shown more interest I feel fortunate that she can take part in the women’s section thanks to the great work done by Milo and Simon.

Rugby is a huge part of who I am and I have enjoyed the many experiences across many years and refuse to hang up my boots just yet (probably should though)….”