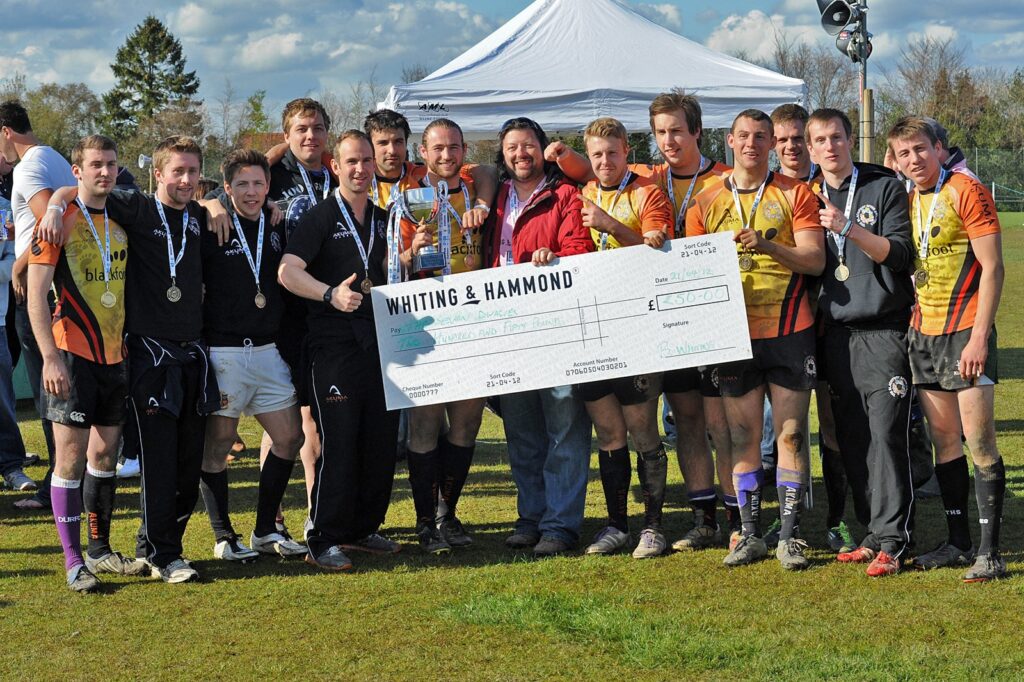 “My first introduction to the club was when Simon Jones first invited me 30 years ago to watch England play at Twickenham with the Vets, little did I know that later on Steve Webb would convince me that it would be a good idea for my pub company to sponsor the inaugural Tunbridge Wells Sevens event in 2012. I could never have anticipated that what would become the Whiting & Hammond Sevens would even see me playing my part on the pitch!

In that first year the team I sponsored (the W&H Leopards) were the Plate winners but despite an annual attempt to emulate this with a W&H team we have not been able to pick up anymore silverware – often failing at the final hurdle. This is despite me pulling on kit and boots and playing my cameo appearance on the field which resulted in a sore body and the odd black eye….that was not in the original “pitch” Webby gave me! It was hard playing in my youth as being a chef I had to work weekends when matches and training took place, it hasn’t ever stopped my enthusiasm for supporting and watching games at Twickenham and travelling to Australia to watch the Lions Tour.

We have had he usual “highs and lows” that go with sponsorship over the years (the latter largely connected with our persistent weather misfortunes, damaged marquees and a stolen Hog Roast) but the highs have certainly outweighed these. It was great to associate W&H with such a dynamic event and it was particularly satisfying that our final year of sponsorship saw Tunbridge Wells RFC both retain the Cup and also win the Plate with the Under 18s squad in 2019.

We now support the club in other areas such as hosting the annual Youth Ball, and taking over club lunch catering whilst I have gone on to play my part too with the occasional 3rd XV and Vets run out! Aside from this I remain a passionate supporter of the club from the touchline and a vigorous “luncher”.

I think rugby is one of the only sports where throughout your life there is a bond and camaraderie amongst everyone, I have continued through TWRFC to meet and make some great life-long friends. I think the club is fantastic and I am proud to be part of it and honoured to be asked to be a VP.”

Busy weekend of Rugby across all section coming up!

Busy week of rugby last weekend across all age groups.

In addition to games below the U11 attended the Cobham RFC festival - scoring 12 tries and conceding 3 across games against Camberly, Cobham & Wimbledon