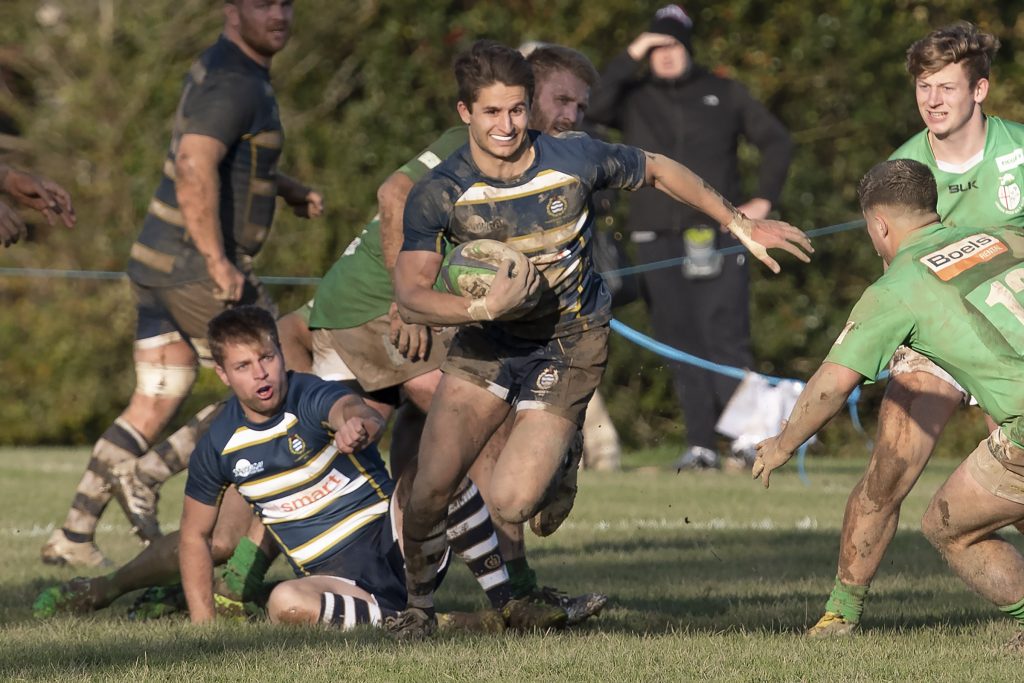 Wells appeared at St Marks on Saturday to find they had a softish and slippery surface- after 17 days of rain in the month- for their game against London Irish Wild Geese relegated from RFU National 2 at the end of last season.

The surface was to have a big say in the way the game unfolded during the afternoon as it began to dry in this London and SE Premier league encounter.

Penalties were to play a big part in the game as players found it difficult to keep on their feet with approaching 30 handed out during the game equally shared between both teams and it was no surprise as first Ciaran Poynter for the Irish and then Frank Reynolds for the home side swapped easy penalties in the first 4 minutes of the game 3-3.

With Irish enjoying a lions share of the ball as they played downhill towards Frant Poynter picked up another 3 points in front on 12 minutes 3-6.

It took the Wells 15 minutes to put Irish under pressure as both Ben Whale and Nick Doherty put in some straight running to set up a ruck from which Frank Reynolds put an inch perfect diagonal kick to the right which was caught at speed by right wing Richard Webster who scored the try which was converted from well out by Reynolds to give Wells a 10-6 lead.

The last 20 minutes of the half saw parity in the set pieces at scrum and line out  and with plenty of ball being moved wide with neither side getting on top of the slippery surface as they moved the ball laterally.

Despite periods being spent by both sides in the others halves the only scores came when Wells twice strayed offside and Poynter made no mistake in kicking both to give Irish a halftime lead of 10-12.

Irish had looked a workmanlike side and had retained possession through a number of phases in front of a crowd of some 180. If Wells were to win the second half they needed to run straighter and take advantage of the slope and the drying top half of the pitch.

At this point coach Simon Whatling rung the changes with Tauaika and Eukaliti being introduced at prop and second row.

Wells then proceeded to dominate possession with No 8 Nick Doherty putting in two surges which came close to tries. Reynolds nudged the Wells ahead with a penalty on 50 minutes 13-12, and from the kick off Wells built a move through the pack with Ben Whale prominent. With the position gained and with an overlap to the right scrum half Eddie Croft went the difficult route with a diagonal grubber which was gratefully fallen on for a second try by right wing Webster in the corner 18-12 after 54 minutes.

Irish were not finished, however, with ‘pocket rocket’ right wing O’Hagan putting in a number of surges which ultimately created a try for his left wing  Josh Steadman  to bring the score to within 1 point 18-17.

At this stage Wells introduced George Montgomery from the bench who brought some extra bite to the centre. It was Montgomery on 70 minutes who put in a great tackle 30 metres from the Wells line – the ball was spilt- and right wing Max Hobbs was on it in a flash speeding some 60 meters to touch down for a try converted by Reynolds 25-17.

With the Wells pack continuing to supply ball Wells came close to scoring a fourth try on several occasions with Whale, Doherty and Josh Hawkins going close before with 2 minutes of injury time gone Hobbs sealed the win -after great approach work from Ryan Taylor – Dennehy -when he slid some 7 metres on his front into the left corner for his second and Wells fourth try and the bonus point.

On a drier surface Wells may well have added to their try tally but Irish were always difficult opponents with a lot of spirit and it was only in the last 20 that Wells pulled away for their fourth victory of the new season.

Next Saturday sees the town side visit CS Stags 1863 as they seek to move higher in the league than their current sixth position. KO 3 00 pm.

Something had to give when the top two met and it was Wimbledon who emerged victorious, ending Rochford Hundred’s 54-match winning run in the process. The visitors put up some fight though coming back from 28-12 down to lead 28-29 before Wimbledon slotted the winning penalty to make it 31-29. The victors did not get the bonus point so move onto 34, with Rochford two points back and Guernsey now onto 29 points courtesy of a thumping 71-20 win over our opponents next week CS Stags 1863.

There is a gap opening to Dorking and Sidcup (winners 25-19 over Bedford Athletic and 23-29 at Guildford respectively) on 21 points. Wells are sixth on 19 points, one ahead of our friends at Sevenoaks who jumped above Hertford after an impressive 12-27 win in Hertfordshire. Hertford stay on 17 points, four ahead of Tring (in ninth) who drew 13-13 at Brighton. The seasiders remain at the foot of the table on 4 points, whilst the four teams above them all lost meaning that CS Stags are 10th on 11, followed by London Irish and Bedford Athletic on 10 and Guildford on 7 points.

Two particular games to note next week see 5th v 4th as Sidcup host Dorking and Sevenoaks will have a clearer idea of their standing once Guernsey have visited.