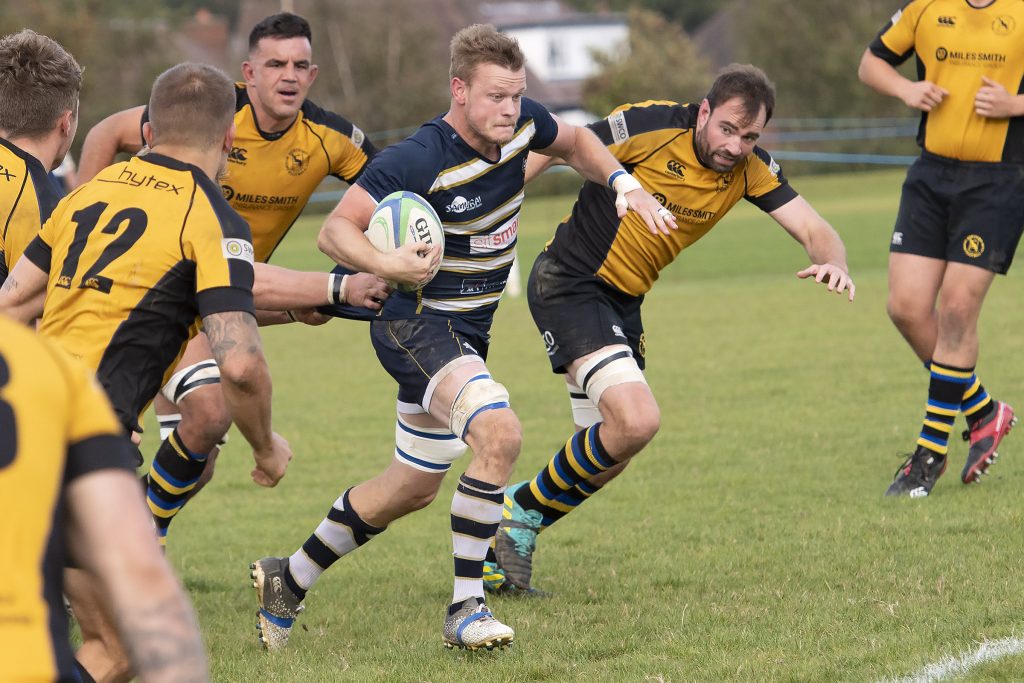 Tunbridge Wells hosted Hertford on the back of three successive league wins. The visitors finished 5th in this league last season when the fixtures book-ended the Wells campaign. A home win was secured (35-27) at St Marks 12 months ago and in April they squeaked the away fixture 33-32. This season they had won their opening game at Brighton before a pair of losses over the last two weeks. However, it was significant that these were against Rochford Hundred, who have not lost in two seasons, and a close loss to Guernsey who are expected to do well this season.

Wells knew this would be a proper challenge especially as 9 of the players who had beaten Brighton last week were injured or unavailable.

Consequently, it was a much changed side that took the field through the Under 8s ‘Guard of Honour’. Carl Straeche and player-coach Aston Croall started in the front row, the latter as a make-shift hooker. Former player Kyle McGarvie answered an “SoS” to provide specialist cover on the bench. Arek Janezcko made his league debut in the second row following his summer move from Thanet Wanderers, whilst Academy products Tom Follows and Ben Kennard joined Chris Brown in a significantly re-shaped back row. In the backs George Montgomery moved to his preferred position at outside half and was partnered by Eddie Croft as both Charlie Rigby and Frank Reynolds were sidelined by injuries.Richard Murray returned at centre and there were spots on the bench for club stalwarts Tiggy Bartley and Ollie Allman.

The players were greeted by a bright day and a strong south-easterly but largely cross-field wind. Its direction would perhaps negate the major benefits of playing down the slope at St Marks but time would tell? Tunbridge Wells kicked off playing up the hill and in the early stages both Ben Whale and Kamil Wiecaszek were prominent ball in hand. However, it was the visitors who took the early initiative and, indeed, they hardly let their grip of the game slip for the next 80 minutes.

After a series of attacks were thwarted, Wells secured a defensive scrum and Montgomery was able to execute a fine 50 metre clearance kick. It was not long, though, before the St Marks side were penalised at a scrum (sadly a recurring theme throughout the match) and Hertford kicked to touch on the Wells 22 metre line. A powerful rolling maul was set which Wells only halted via illegal means and another kick to touch put the visitors just 5 metres out. The home supporters’ sighs of relief were palpable when the ball was called not straight but  the respite was temporary. With Wells collapsing their set scrum, Hertford flanker Luke Mongston took a quick tap penalty and charged over the line for a try. This was superbly converted from wide on the left by Kyle Lemon to make it 0–7 on 12 minutes.

Hertford were quickly back in possession but a strong Murray tackle dislodged the ball and Richard Webster kicked ahead to gain good field position for the home team. However, the visitors stole the line out and were able to clear. Whale and Follows were robust defenders throughout but Hertford were starting to exert a clear advantage at the set piece as the Wells scrum and line-out came under pressure. On 18 minutes they were penalised again in front of the posts and Lemon struck a penalty to make it 0–10.

The home team were trying to get their attacking wingers Webster and Max Hobbs in play and Webster was prominent with a series of midfield thrusts. However, both he and Murray were thwarted when looking like they might break clear. Sadly, Murray soon departed, after a lively performance, with a painful looking arm injury to be replaced by the experienced Allman. He went to full back with skipper Ryan Taylor-Dennehy moving into the outside centre position after 25 minutes.

On 29 minutes the visitors received another scrum penalty which Lemon slotted to make it 0–13. Frustration with the misfiring set piece was starting to build but Wells continued to try and play ambitious rugby when they did have the ball. Eventually, Wells pressure did produce points when a fine Chris Brown turnover saw Montgomery slot a penalty on 31 minutes. 3–13.

On 36 minutes, though, Hertford were to stretch the lead after the home team were penalised for not rolling away at a ruck. The attacking line-out was secured and after going through several phases of play, a gap opened in the midfield which saw visiting lock Dan Peasnall gallop through to score a try under the posts. With Lemon slotting the conversion it was now 3–20 on 36 minutes.

This only served to reinvigorate Wells who had one of the best periods of play for the rest of the half. Croall twice connected with the Janezcko at line-outs to give better field position and both Webster and Croft made half-breaks. The Hertford defence was pretty tenacious all afternoon and remained steadfast. Eventually, they conceded a penalty in front of the posts deep into injury time which Wells decided to kick for an attacking line-out rather than take the easy three points. Unfortunately, the ball was stolen and half-time was reached.

The swirling wind made it difficult for all the players but, without doubt, Hertford’s ball retention and territorial kicking game saw them fully deserve the lead at the interval. Unless Wells could start to secure some more consistent set piece ball then the hopes of a recovery looked unlikely. They would at least have the advantage of the St Marks slope in the second period. Half time 3–20.

Any hopes of a famous second-half recovery were virtually extinguished from the kick-off, though. The Hertfordshire side camped in the home 22 for three minutes before a series of strong drives eventually saw Mongston cross for his second try and with Lemon slotting the additional two points it was now 3–27.

Montgomery and Taylor-Dennehy were still doing their best to create chances and Mike Doherty now came to the fore with two strong runs. On 47 minutes McGarvie replaced Straeche and went to hooker which saw Croall move to his more customary position at prop. Indeed, this had an immediate impact as Wells earned a scrummage penalty and Montgomery’s fine kick took Wells to within 35 metres of the Hertford line. From the line-out Taylor-Dennehy beat two tacklers on the outside channel before feeding back inside to Doherty who was able to run untouched under the posts for the try. Montgomery knocked over the conversion and it was now 10–27 on 50 minutes.

Almost instantly, Taylor-Dennehy almost snaffled an interception for a likely try which could have changed the last half hour of play. Sadly the ball went to ground and Hertford were able to clear their lines. The ever-popular Bartley now replaced Follows but it was the visitors who were soon back on the attack and looked likely to score from a rolling maul before a fine steal by Kennard. The visitors pressure was pretty incessant now and they had another attacking opportunity deep in Wells territory. However, pressure was relieved when a penalty was awarded at ruck with Bartley and Brown working hard in the near vicinity…..

On 61 minutes Straeche returned for the injured McGarvie, but the home side were finding it impossible to lift the Hertford pressure. With Wells having already been warned as a team for conceding too many penalties in their own 22, Bartley then received a yellow card for a perceived ruck infringement. Hertford chose the attacking line-out option in their quest for a fourth try and the bonus point. From this penalty a strong rolling maul saw Mongston score his hat-trick try and Lemon completed an immaculate kicking display given the conditions to add the conversion on 65 minutes. 10–34.

Brown and Doherty were two of Wells’ better players on the day and they continued to drive their team mates forward although with time running out any hopes of securing even a try bonus point were now looking slim. However, full credit should be given to the Wells team for their efforts. The visitors had now been reduced to 14 players themselves and, eventually, deep in injury time Whale was rewarded for his industrious performance when he showed great tenacity to twist out of the grasp of two defenders to score an unconverted try. Full Time 15-34.

Hertford are clearly the best team that a (depleted) Tunbridge Wells side have met during this league campaign thus far and they will no doubt learn lessons from this match. The need to shore up the set piece remains evident and, hopefully, with a larger squad to pick from  Simon Whatling and his coaching team can work on this ahead of two tough games on the road over the next fortnight. Next week Wells travel to Guernsey and then the week after they visit joint league leaders Rochford Hundred for the first time.

And then there were two……..

Five clubs started yesterday undefeated but with our defeat and Sidcup’s exciting 37-36 loss at Bedford Athletic this was reduced to three. Wimbledon had an impressive 18-44 win at Tring (always a tough place to play) to maintain their 100% record which left our next two opponents squaring off. It was Rochford Hundred who triumphed 43-27 over Guernsey maintaining their remarkable unbeaten run. Wimbledon and Rochford sit atop the league on 20 points, ahead of Sidcup, Guernsey and us on 16, 15 and 14 points. Hertford come next on 11 points head of London Irish Wild Geese on 10 and Sevenoaks one point further back after both secured home wins against Brighton (38-18) and Guildford (17-3) respectively. The final game saw Dorking win 18-24 on their trip to CS Stags 1863. The Stags and Brighton are the now only sides awaiting a win and they clash next week.