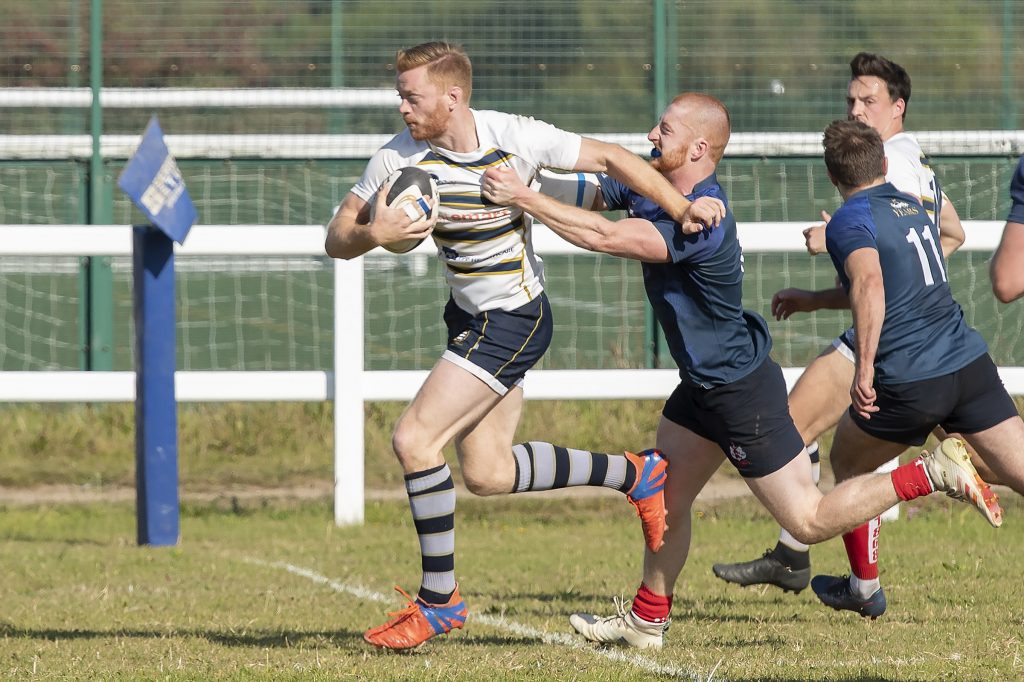 Tunbridge Wells arrived in Brighton to blue skies, and the temperature in the low 20s, as they sought a hat-trick of wins to start the league campaign. Their hosts were promoted via the play-offs last season and were determined to take the honours having suffered defeats in their opening two games.

The starting XV featured three notable player changes. Two strong performances in the previous games from the bench earned George Montgomery a starting spot in the centre, and he was joined in the backs by “one of our own” as Charlie Rigby replaced the unavailable Eddie Croft at scrum half. In the front row, Stuart Nicholls could move to his preferred hooker spot as Brendan Crosilla returned for one last game ahead of his return to Australia, following two outstanding seasons at prop. Two Academy products in the shape of forward Tom Follows and winger Henry Toomer came on to the bench to earn their First XV ‘caps’ after strong displays in the Second XV.

With a firm pitch it was clear from the outset that this would be a perfect day for attacking play from the backs and given how well the Wells three-quarters had performed in the wins over Guildford and Dorking, the travelling support would have had high hopes of a positive result.  However, as has so often been the case in this league, Wells were slow out of the traps and Brighton had all the early possession which was rewarded when a penalty made it 3-0 to the hosts after 5 minutes.

In fact, the visiting backs hardly got a sniff of the ball in the first quarter as the home side played virtually faultless rugby. “Virtually” is the important word here though as they could not turn this pressure into points. This was testament to fine and determined defending by the boys from St Marks who resolutely held the Sussex team at bay.

What was key to the game was how would Wells perform when when the opportunity to play with the ball finally came. The answer was that their first piece of good possession brought an excellent individual try as Mike Doherty ran onto the ball strongly taking a good line and galloped in from 50 metres shrugging off the Brighton full back as he approached the line. The conversion slipped wide. 3-5. Follows temporarily replaced the injured Josh Hawkins.

It was another 10 minutes before Brighton, finally, utilised their possession and they crossed the line capitalising on an untidy line-out to make it 8-5 on 30 minutes.  To the pleasure of the Wells coaching staff, the response from their players was almost instant with centre Doherty demonstrating his strength again, breaking through the Brighton defensive line and making 15 metres before going to ground.  The ball was recycled with the impressive George Montgomery taking it forward before it went through the hands of Doherty again, Ben Whale (industrious as ever) and Nicholls to in-form winger Max Hobbs. He accelerated into the left hand corner to finish a superb team try. Frank Reynolds’ fine conversion took it to 8-12 at half time.  Considering Wells had just about 20% of possession in the first period some would consider the score flattering, but with stout defence, good competition at breakdown via the likes of Chris Brown and Mike Hathaway, some astute kicking to relieve pressure and most of all a deadly attacking force, the second half was eagerly awaited.

Just three minutes into the second half Wells were on the attack again with the backs spinning the ball from the left touchline to the right. Richard Webster did well taking the tackle, and offloading to the ever-supporting Mike Doherty who created the gap and passed to Hobbs who went in on the far left, carrying round to under the posts for his second try of the match, and his fifth in two games. Reynolds slotted the simple conversion. 8-19.

The Wells scrummage was much more secure this week with Crosilla and Kamil Wiecaszek performing well and with the Kent side very much in the ascendancy it looked simply a matter of time before the bonus point try came. Sure enough on 51 minutes the four-try point was in the bank. A set of phases started with Mike Doherty passing to brother Nick who carried strongly. Great continuity saw the ball pass through many sets of hands before finding its way back to team captain Ryan Taylor-Dennehy in the middle of the park. He had three defenders (one of whom was popular former Wells player Jake Thompson) between him and the line, but the skipper is an elusive runner and he left them flat-footed before gliding in under the posts.  With Reynolds’ conversion the score was now 8-26 but with half an hour to go the game was far from settled.

To be fair to Brighton they never gave up and their response was immediate taking the score to 15-26 with a converted try. At this point the game became somewhat scrappy with Wells giving away far too many penalties which allowed Brighton to build pressure. Two successful penalty kicks saw the score clawed back to 21-26 with 15 minutes to go.

Nerves were now starting to spread amongst those on the touchline but the players remained confident that their backs would deliver. Wells were an attacking force throughout when in possession and with 10 minutes left on the clock they had an attacking scrum on the Brighton 22 metre line. The ball was fed out to Henry Toomer, who was now on, and he took a lovely line before jinking his way past four defenders for the score in the corner. What a debut moment!  21-31.

Wells finally put the win beyond doubt three minutes later with their sixth try. The ball was sent across the pitch at pace to the electric Hobbs, about 60 metres out.  He burst past the defensive line and offloaded to Montgomery giving the centre a 40 metre run in eluding a determined Brighton chaser. The try was converted by Reynolds to make it 21-38. It was deep in stoppage time when Brighton got their third try taking the final score to 26-38.

Despite some definite areas for improvement – the line-out, loose passing and inefficiency at the re-start all made this game more difficult for Wells – these are exciting times to watch Tunbridge Wells with scintillating back-play paired with full commitment to the cause.

Next week (28th September) Wells host a Hertford side who have performed strongly in this league for several seasons. Kick off is 3 pm and all travelling support would be greatly appreciated.

Wells remain one of five sides to have won all three games thus far. Wimbledon and Rochford Hundred sit atop the league on 15 points, after 50-19 and 19-40 wins at home to Sevenoaks and away to Bedford Athletic respectively. Guernsey won again at Hertford (17-21) whilst fellow Kent club Sidcup continued their fine start to the season with a tight 26-22 win over Tring. The Channel Islanders, the South-East Londoners and Wells then come next on 14 points. Finally, Dorking and Guildford (the teams Wells had beaten previously) recorded their first victories with home wins over London Irish Wild Geese 22-7 (Dorking) and CS Stags 1863 24-7 (Guildford).