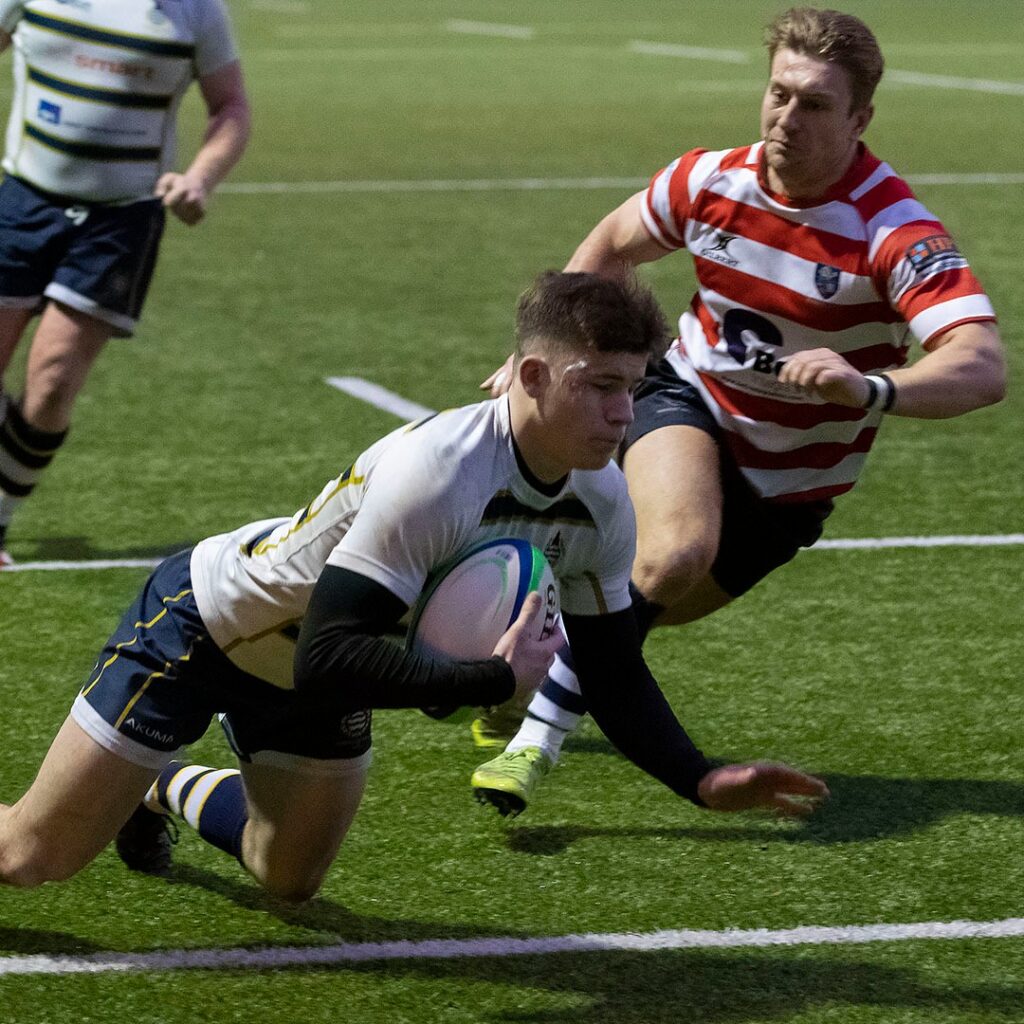 Wells travelled to Havant with high hopes after their excellent performance against second place Wimbledon the week before. The weather was still and dry with the game played on an artificial pitch under lights: perfect conditions for a running game.  Havant kicked off and a poor clearance from Wells put them under immediate pressure from the resulting line out.  Wells were judged offside in front of the posts allowing the Havant captain Joel Knight, one of three brothers playing in the Havant backs, an easy three points after two minutes.  Wells came back strongly and after a good solid scrum at which Havant were penalised Jack Anderson, the Wells stand off, converted to make the score level at three all after six minutes.  Havant now upped their game and scored a try in the corner after Wells had lost a line out on the opposition 10-metre line and Havant passed slickly down the line to put their winger in.  Knight was successful with the difficult conversion leaving Wells trailing 10 – 3 on 11 minutes. Wells came back again into the opposition 22 with the resulting pressure leading to a penalty kicked by Jack Anderson to bring the score to 10 – 6. Havant then altered their game tactics relying much more on their bigger, more powerful and aggressive forwards.   A driving maul following a line out close to the Wells line resulted in the ball being moved to the right and a Havant try.  The conversion was successful making the score 17 – 6 on 26 minutes.  Despite some good Wells play Havant were soon back putting pressure on the Wells line with a series of line outs and driving mauls which Wells defended well.  This defence came at a cost when the Wells second row, Tom Pithouse, was yellow carded on 35 minutes.  Another line out won by Havant resulted in more pressure on the Wells line with the Havant No 8, Gavin Hughan, going over from short range.  The try was converted, to make the score 24-6.  Havant scored their fourth try securing a winning bonus point before half time.  The conversion was missed leaving the score at   29 – 6.  Wells produced some good play to work the ball out of their 22 and when Havant were penalised at a subsequent scrum on the Havant 10-metre line Anderson produced another fine kick to bring the score to 29-9 at half time.  Wells, back to a full complement, started the second half brightly, nearly scoring from the kick off when Havant failed to deal with the ball. Further good Wells play including a fine break by Max Hobbs resulting in a penalty converted by Anderson on 54 minutes, 29 – 12.  But there was no dealing with the powerful Havant pack whose driving maul led to a further try two minutes later.  The conversion was missed leaving the score at 34 – 12.  Soon afterwards Wells were penalised at a scrum and a quick kick through allowed Hughan to touch down over the Wells line.  The conversion was successful, 41 – 12.  Wells again came back, and two excellent Wells scrums and smart handling produced an overlap to allow Jack Smith the Wells winger to score a try to produce the final score, 41 -17.