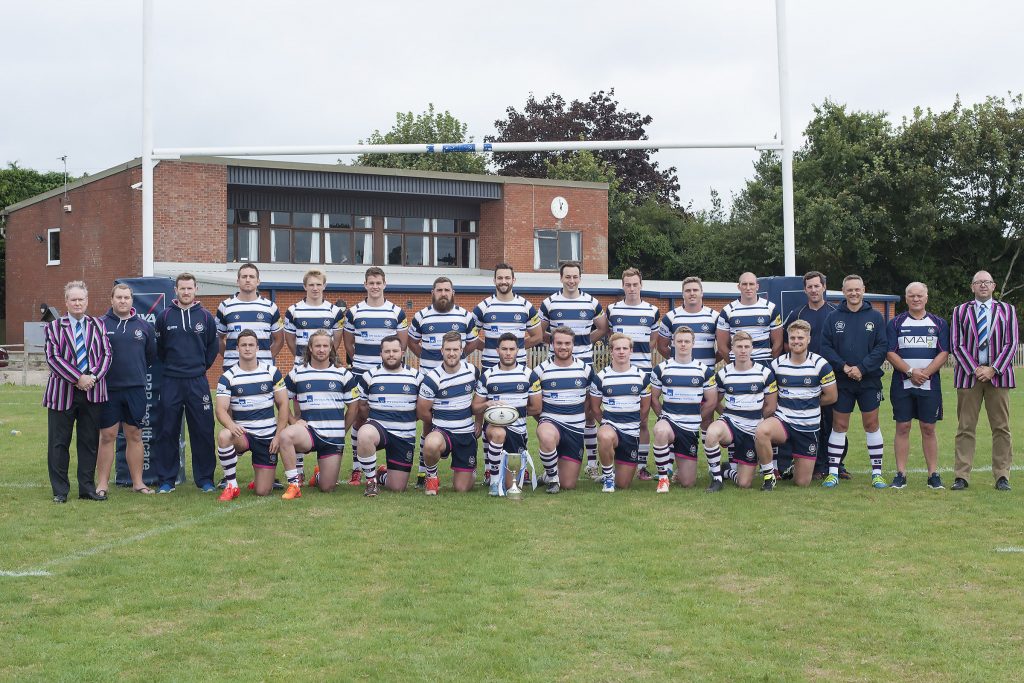 Here is our the promised look back at the last meeting between Wells and Oaks. Both teams had been promoted to London One South from London South East Two at the end of the previous season…..

“The first A21 “Derby” of the season was a typically competitive match between two clubs who are fierce rivals on the pitch, yet good friends off it. Indeed, the tone was set by a hard-fought curtain raiser between the under 15 Ladies sides from both clubs.

Wells were forced to make some changes to their squad following injuries collected at Maidstone last week, and handed competitive debuts to wing John Rumsey, hooker Kyle McGarvie and centre Charlie Dagwell from the bench. The were faced with a much-changed Sevenoaks squad who have recruited well over the summer and who had kicked off with a 47-0 win over Gosport in their opening match under the guidance of new head coach Adam Bowman.

Despite the unseasonal weather conditions a healthy crowd was in attendance at St Marks and saw the home team kick off playing up the hill but with the strong south-westerly wind behind them. Rain clouds threatened ominously but the first 30 minutes were dry before the skies opened.

An excellent early tactical kick from outside half Frank Reynolds put Wells on the front foot and they were to spend most of the opening quarter camped in the Sevenoaks half. Several times they stretched the visitors and looked as though they might score but well-structured and tenacious defence kept the hosts at bay. One particularly good Reynolds break seemed likely to bring a try but Sevenoaks remained resolute and were able to clear just as it looked like an attacking Wells scrum would push them over the line.A lack of precision and patience had been evident at Maidstone and a similar accusation could perhaps be made again during this period.

There is more to Sevenoaks than hard tackling though and as the game moved into the second quarter scoreless they came into the match in an attacking sense. After a box kick was fumbled by Wells an attacking line-out was halted illegally and Sevenoaks’ Ben Adams was given a difficult penalty shot on 23 minutes. His kick struck a post though and was well cleared by Wells. The visitors were soon back in the home 22 metre area and with an edge in the set-scrum they launched a series of attacks. The Wells defence has also been powerful in the past 13 months and it needed to be during this period. It was also a shade unconventional when loose-head prop Nick Blacklock kicked it 40 metres down the ground to relieve the pressure, if only temporarily.

A steal by ex-Wells product Scott Sedgwick put Oaks back in possession and when the visitors did try to kick clear the visitors were very content to run it back at the boys from St Marks. Another former Wells player Jamie Owen beat three men before releasing prop Dan Power but he was superbly tackled by opposite number Chris Goodyer. The resultant ruck brought a penalty and a kick to touch. The ensuing maul was just held up but as it looked like Sevenoaks would open the scoring, Mike Hathaway and McGarvie combined for a crucial turnover.

The game was a very tight and attritional one, much more reminiscent of the pre-Christmas clash at St Marks last season when Wells won by a single score than the wide-margin victories in the League and Cup at The Paddock in the spring. For Wells Matt Cook, Andy Burgess, James Lineham and Nick Doherty were much to the fore in defence and driving the ball, whilst Charlie Harding and Reynolds were at the heart of the best attacks. The game opened up following some errant kicking and Wells outside centre Alex Maynard almost escaped on the outside but was hauled down by his opposite number.

On 37 minutes Sevenoaks were penalised for not using their arms in the tackle and once referee Nikki O’Donnell had calmed the players down following a skirmish Reynolds fired a superb 40 metre touch kick. Sadly for the home support the line-out was lost but Wells were finishing the half strongly and when Oaks were ruled offside Reynolds stroked over the 30 metre penalty kick for a 3-0 half time lead.

The second half kicked off in heavy rain that was to be a feature for the rest of the game. The visitors must have been delighted to turn around just a penalty behind given the wind they now had at their backs. Indeed, the wind was now so  increased in strength that Wells decided that the best way of exiting their own territory was through carrying the ball rather than kicking. The danger with such a strategy is what happens should the accuracy of pass and contact be found wanting and pressure from Oaks soon forced an attacking 5 metre scrum. However, excellent defence from Hayden Pope and Rumney resisted the first Sevenoaks attack but they still looked likely to score only to spill the ball over the line. A fine Chaz Spence clearance then relieved the pressure.

Not long after, Reynolds looked to have escaped for a run in to the line after Maynard had gathered a kick ahead but the referee, who had a good game, was well-positioned to adjudge a forward pass. On 50 minutes Sevenoaks drew level. A strong Simon Humble run saw Wells penalised and the impressive Adams converted a 40 metre penalty. 3-3.

A scrum infringement saw Adams granted another penalty shot soon afterwards but from halfway his kick fell just short. On 56 minutes Hayden Pengelly came on for Burgess as the rain fell at its heaviest.

The game was about to enter its key phase. A sharp Pope counter-attack was thwarted on the halfway line but illegally so and Owen was sent to the sin bin for playing the ball on the floor. Whilst the attacking line-out was halted by an accidental offside, Wells soon had the ball again and Sevenoaks were penalised at the ruck. As Spence endeavoured to up the tempo with a quick tap, he was obstructed by Sedgwick and the referee acted decisively to dispatch him to the bin too. With Sevenoaks down to 13 for 4 minutes surely this was the home team’s best opportunity?

Sevenoaks are a resolute unit and managed to earn a scrum penalty to relieve the pressure but Wells were now, unsurprisingly, very much on the front foot. A Doherty chip through nearly released skipper Lee Campion, whilst Pope and Harding also combined to almost set the captain free.for Wells Jake Thompson came on for Hathaway and Dagwell replaced an injured Pope which saw Maynard move to full back, whilst Owen returned for the visitors to bring them to 14 players.

An attacking scrum saw the home team set up a series of “pick and go” plays before Goodyer forced his way over from close range for a crucial try on 75 minutes and with a superb Reynolds conversion drilled low into the wind the home team were back in the lead. 10-3.

Sedgwick now returned and Oaks came right back at Wells forcing a knock-on and a dangerously positioned scrum. Much to the relief of the home support a free-kick was awarded for an infringement and Pengelly and Doherty carried the ball to safety.

With 5 minutes of injury time still to play it needed an excellent Spence kick to get play into the Oaks half and soon when the returning Burgess was taken out in the air at a line-out, the home side were able to turn the screw. As time ran out Sevenoaks were forced to try and run the ball out but swarming defence halted them and it looked as though Thompson had scored when a ball went loose behind the line. The official was unsighted but time was up and in all honesty Oaks deserved at least their losing bonus point.

Two wins from two is exactly what Wells were targeting and to have achieved it without reaching last season’s high standards means they have got to third in the league whilst having a lot to work on still. If the first two matches are any measure of what lies ahead then this is going to be the anticipated fiercely competitive season. It continues next week when Wells travel to Southampton to take on an unbeaten Tottonians team for the very first time, and they now sit in second place in the league after a 55-5 win in their last game. It is a 3pm kick-off and the club will be taking a coach for players and supporters.