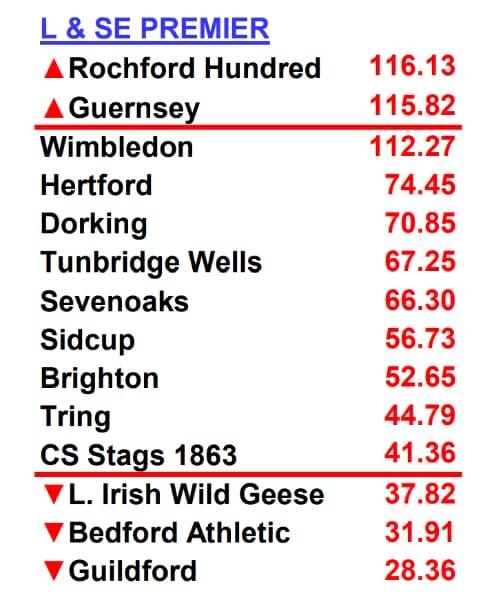 So that was the 2019/20 Season. Covid-19 might have brought it to a sudden and shuddering halt but it cannot take away the memories…..and more of that later….

“How were the final tables calculated?”, I hear you ask. To use the language of Eurovision, as a homage to the devastating cancellation of this iconic event too (and in your honour Bruce), the votes have been counted and verified and here are the results of the RFU Jury……

……..well actually it wasn’t a voting system that has been implemented. Instead, the final standings for the Greene King IPA Championship and men’s and women’s community game have been calculated on a “best playing record formula maintaining promotion and relegation for those leagues”.

In essence, the league positions have been determined by awarding points for a team’s outstanding matches based on using that team’s average points per game total for home and away fixtures completed. I believe this to be an eminently sensible approach as the RFU took soundings and quickly discovered that just as there were inevitably teams who were very keen to achieve the promotions their performances had merited to test themselves higher up in 2020/21, there were also a lot of clubs who would just as happily accept relegation so that they could re-group and play next year at a more appropriate level. This average has then been applied to all outstanding fixtures and added to a team’s league points as at 14th March. The RFU’s example of how the maths works is a good one:-

Consequently, Rochford Hundred win the London & South East Premier title by the small margin of 0.31 points from Guernsey. The Channel Islanders have the compensation of promotion too though as they had a better points average than the South West Premier runners-up Weston Super Mare. Barnstaple have been a bit of a yo-yo team between levels 4 and 5 in recent seasons and it is they that won the South West league and join Rochford and Guernsey in National Two South next season. Whilst third-placed Wimbledon might disagree, these two sides were, to my mind, evidently the best teams in the competition and thoroughly deserve their promotions.

After Wimbledon, Hertford and Dorking came a distant 4th and 5th whilst we just leap-frogged Sevenoaks into 6th. After two cracking drawn games it would perhaps have been fitting had we ended up tied but we just secured “bragging rights” (LOL) by 0.95 points – 67.25 against 66.30. Our friends at Knole Paddock should be rightly proud of a more than solid first season at this level and we look forward to rutting antlers again in 2020/21. Sidcup and the resurgent Brighton came 8th and 9th.

It would have been an intriguing “run in” for the bottom five sides as they sought to avoid the three relegation slots. However, the points formula has perhaps come to the rescue of Tring (10th) and CS Stags 1863 (11th). London Irish Wild Geese (12th), in particular, will rue the number of close games they lost. In fairness Bedford Athletic and Guildford have occupied the bottom two places for most of the season  – I am sure Guildford will wish they had found the form the showed in the last few games a shade earlier.

It takes a little conjecture at this stage to predict how the LSE Premier might look next season…..but why not!? Havant and Westcombe Park (a cracking effort give the strength of Camberley, Medway and Cobham in London One South) are promoted to join us, as are London One North runaway winners North Walsham. Sutton and Epsom were relegated so will re-join us after just one season at Level Four. The final place is the one that is open to speculation. We could be asked to travel to Bournemouth who were also relegated from the league above, or there might be a sideways move for Oundle who would be the closest Midlands Premier team as “the crow flies”. However, this would be a tough ask given that they have only now been promoted into that league, so my money, if I were a betting man (who am I kidding – “I am” a betting man) and if it is not Bournemouth, would be on a sideways move for Maidenhead. Considering they came third in the South West Premier, the 2020/21 London & South East Premier League is looking like it could be even more competitive next season. Given the current rugby embargo I suspect my cry of “Bring it on” will be echoed by most.

Elsewhere within the region, I was thrilled to see that Tonbridge Juddians have finally secured promotion to Level Three and the hugely competitive National One after finishing runners up to Taunton Titans. A huge amount of work has gone into this and they will maintain Kent’s representation at these heights in joining Old Elthamians, with Canterbury relegated after an extremely tough season. Looking below us, two Kent teams were relegated from London South One as Dartfordians and Beckenham return to a very Kent-heavy London Two South East Division, with Haywards Heath going in the opposite direction. They will be joined there by Ashford and Folkestone who dominated London Three South East, so with one likely sideways move for a Sussex side (Hove?) they will replace relegated Dover and Maidstone to have 10 Kent sides out of 12.

So finally, a few personal thoughts on the season….nothing too controversial I hope! It was great to see some more of the fine running rugby that we have become used to from the men from St Marks. Mike Doherty and Max Hobbs were exciting finishers and the whole back-line marshalled, by Frank Reynolds and skipper Ryan Taylor-Dennehy, played some exhilarating rugby at times. This was, as ever, based on having the ball and the likes of Tui Tauaika, Agy Eukaliti and,in particular, Ben Whale were exciting acquisitions.

However, a word must go out to the yeoman front row. Against habitually bigger packs we were often under significant pressure in the set piece so my final accolades go to Stuart Nicholls and Carl Straeche. Club men through and through who never gave anything less than their all. Well played fellas.