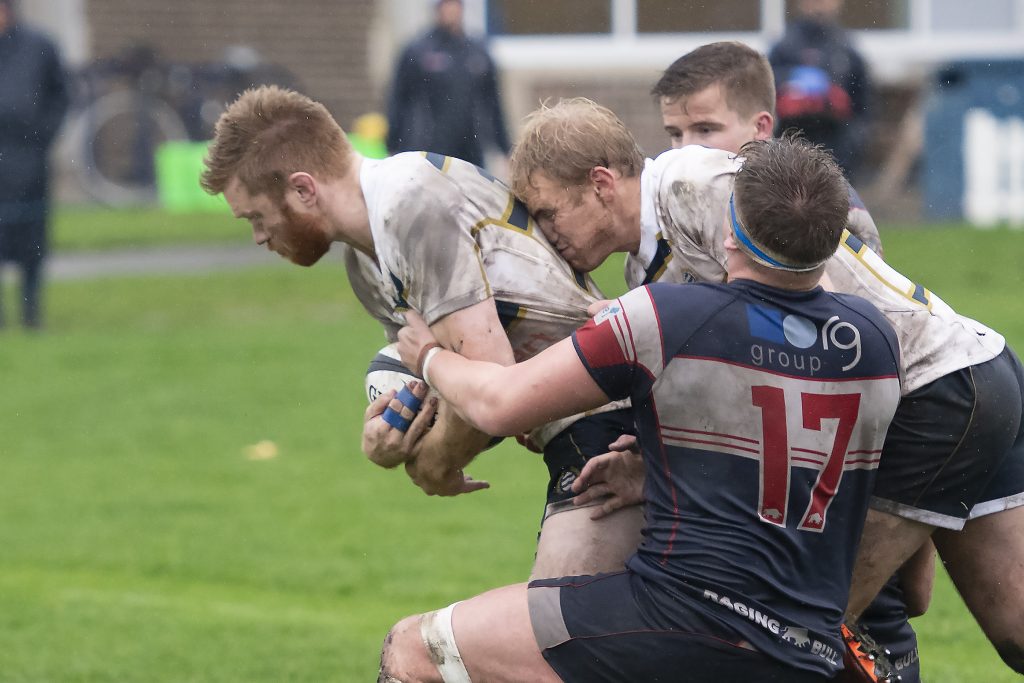 Tunbridge Wells’ trip to Chiswick was, perhaps, something of a case of “after the Lord Mayor’s Show” following England’s thrilling World Cup semi-final win that morning, but for the players involved this was an important game in it own right. CS Rugby have had a topsy-turvy season beating the likes of Hertford but also losing what would be perceived as easier games. They also needed to bounce back from an a 71-22 thumping last time out in Guernsey. Wells, on the other hand, were looking to build on the hard-fought win over London Irish Wild Geese that ended a run of three defeats.

Wells made one alteration in the backs with George Montgomery starting at centre which saw skipper Ryan Taylor-Dennehy revert to his customary full back role and Ollie Allman move to the bench. In the forwards, new Kiwi signings Tui Tauaika and Agy Eukaliti started at prop and lock respectively after robust debuts from the bench last week. In addition, there was a 1st XV debut for Skinners School and Heathfield product James Pancaldi at flanker after some strong efforts in the Seconds, emphasising the squad approach that is being built. The ever-reliable Ben Whale moved back into the boiler room.

Unsurprisingly, ground conditions were damp and the weather did its best to hamper any constructive play as it got progressively wetter as the afternoon went on. The men from Kent started positively playing into the wind and after good approach play to the left, a switch back to the right was to earn a penalty shot which Frank Reynolds converted on 4 minutes. 0-3.

Wells were awarded a scrum penalty but sadly this was not a sign of things to come as the set-piece again came under pressure and faltered – in the first half anyway. The visitors were playing well ball in hand but perhaps could have taken a more pragmatic approach and kicked a little more for territory given the conditions. The Stags were certainly happier to put boot to ball and this enabled them to have a sustained period of play in the Wells 22 on the quarter of an hour mark. When the Wells scrum collapsed the home team looked to take advantage by opting for their own attacking scrum and from this they opened their account when their centre crossed for a try that their outside half converted. 7-3.

When Taylor-Dennehy was taken out after kicking the ball forward, Wells had a penalty kick 22 metres out that Reynolds will have been disappointed to miss. However, this was not to be crucial as the Wells forwards took control of the ball on 23 minutes and Whale forced his way over after a superb series of pick and drives. Reynolds slotted the conversion to make the lead 7-10.

The team from St Marks were enjoying a dominant spell with Tauaika and Pancaldi prominent. Whale has been a yeoman ball carrier since the campaign started and another great drive put Wells on the front foot. Showing great vision Montgomery spotted Richard Webster out wide and (in an echo of their under 15 season together) he struck a sweet diagonal kick that the in-form winger gathered before diving in for the try. The tough conversion was missed but this made it 7-15 on 28 minutes.

Stags narrowed the lead almost immediately with a penalty but then Wells struck back after a powerful Tauaika surge saw the home team penalised in front of the posts and Reynolds made it 10-18 on 32 minutes.

With Montgomery, Whale and Nick Doherty carrying well the visitors looked the more likely team to score again as half-time approached. However, Stags kicked into the Wells 22 when the visitors conceded another scrum penalty. From the line-out they seemed powerless to stop a fine Stags rolling maul which went 20 metres to score out wide. An excellent touchline conversion made it 17-18 at half time.

As the second half started hopes will have been high that Wells would be able to put the game to bed. They now had the wind advantage and had looked the better side in the first 40 minutes, but there was a need for more precision (admittedly difficult in the conditions), a more secure set-piece (although there had been more positive signs in the line-out) and a more astute kicking game for territory.

If it was more energy that Head Coach Simon Whatling had asked for in the interval then he certainly got it. Excellent approach play put Wells just 5 metres out only for a knock on to spoil the good work. As the rain got heavier so, disconcertingly, did the penalty count against the visitors. Back-chat and another scrum infringement gave the momentum to Stags and it took a sustained period of robust defence to force a knock-on and alleviate the pressure on their line.

It was a time for experience now as Croall (who was to make a major difference in the scrum) replaced Wiecaszek and Allman took over from Webster. On 58 minutes Reynolds slotted a third penalty goal after Stags were caught offside but at just 17-21 the game was still up for grabs.

Indeed, it was the home side that now seemed to have taken the game by the scruff of the neck. Wells were themselves caught offside on halfway and from the attacking line-out Wells were penalised again and to make matters worse Whale was shown a yellow card. Sensing this was the time to strike Stags opted for a scrum and were able to cross with ease for a converted try that took them into the lead at 24-21 on 65 minutes.

This Wells side is nothing if not tenacious though and, although they were a man down, they now seized a grip of the game that was to see them home for  the win. Despite being the man short in their forwards (and Montgomery playing as a makeshift flanker!) the visitors earned a hugely significant scrum penalty. Would they opt for the easy three points on offer to tie the scores or, sensing a momentum shift, would skipper Taylor-Dennehy roll the dice and take the braver option of another scrum despite being short-handed? A scrum it was and when Stags were penalised again it was they who now lost a player to the sin bin. This time another scrum was a less controversial option and when Mike Doherty crashed through under the posts for the try the decision was fully vindicated. Reynolds had supported Doherty, and the outside half now added the extra two so with 5 minutes plus injury time to play it was 24-28.

Luke Hawkins was on for Tauaika (with ever dependable Stuart Nicholls moving to prop), and Whale also now returned from his spell on the naughty step. The question was could Wells now close the game out and the answer was definitively “yes”. Stags were penalised for killing the ball and Reynolds struck a booming penalty from the halfway line on 78 minutes before taking advantage of an easier opportunity two minutes into injury time to kick his fifth three-pointer. This put the win beyond doubt at 24-34.

No bonus point this week then but that should certainly not take the gloss off another praiseworthy away win for Tunbridge Wells. Make no mistake, this is a game that Wells could have lost and indiscipline needs to be worked on. The conditions also made their standard ball-in-hand based game plan a difficult one to execute as both the ball and ground were slippery. There might, therefore have been an argument for not being so dogmatic and putting boot to ball more often but that’s easy to say from the sidelines and this was still another strong performance where they had to dig deep. Reynolds had a pleasing 19 point haul to reflect on; Whale, Montgomery, both Doherty brothers and Allman showed aggression and intelligence at crucial moments, whilst Croall’s technical excellence at the scrum was a defining contribution.

The Rugby World Cup Final always meant this would be a rest week coming up and the players can look to recover and recuperate ahead of the first fiercely anticipated “A21 Derby” of the season as Wells host Sevenoaks at St Marks on 9th November. Kick off is at 2.30 and a large crowd is expected.

Wimbledon and Rochford Hundred both secured bonus point wins at home – against Guildford (52-7) and London Irish Wild Geese (26-0). They now sit on 39 and 37 points respectively and have stretched the gap back to Guernsey in third on 33 who again left a try bonus-point behind in a hard-fought 10-17 win up the road in a” mud-bath” (Guernsey’s words) at Sevenoaks. This provides a reminder (not that we needed it!) that the Oaks will be tough nut to crack in a fortnight. Sidcup are now fourth on 25 points after beating Dorking 23-11, and we sit fifth on 23, ahead of Dorking and Hertford on 21. The last-named earned local bragging rights in their always fiercely-contested ‘Derby’ game at Tring with a 9-14 win. Sevenoaks are 8th on 19 before a 5 point gap exists to Bedford Athletic (20-10 victors over bottom-placed Brighton) and Tring on 14. CS Stags are 11th on 11 points, followed by London Irish (10), Guildford (7) and Brighton on 4.